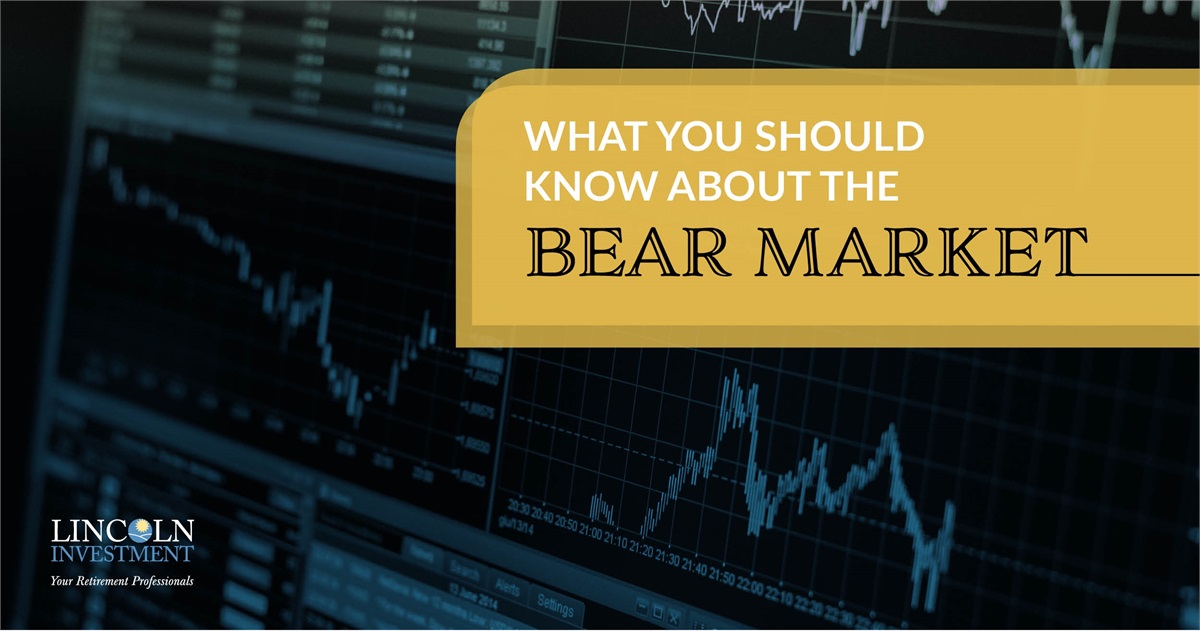 A bear market is generally defined as a decline in the stock market of 20% or greater. Other definitions add a time element of, for example, 60 days.   Let's discuss their regularity, what to expect based on history, and what you should and shouldn’t do in a bear market.

But first a trivia question of sorts, can you recall the most recent market slides since the end of the financial crisis decline in 2009?  More on that later.

Here are three things you need to know about bear markets.

1. Declines are normal and temporary.

Bear markets are a regular if not normal part of stock market cycles, having occurred roughly every 5-6 years (since World War 2). The typical decline is roughly a loss of 1/3 in value.  They have all been temporary, last about a year, and each one we experienced up until this point has subsequently seen a recovery and eventual new all-time highs. It is fair to say the long-term trend has always been up despite these temporary declines.

History doesn’t repeat but it sure does rhyme. Markets go through cycles.  Although bear markets are typically surrounded by adverse events, it usually doesn’t mean these events (fill in the blank, currently Washington D.C., trade wars and the Fed raising rates) have ever been "different" in a sense that something in the market or economy is irreparable.  In fact, there is always bad news out there even in good markets.  However, in bad times the media and markets tend to key in on the bad.

“You can find good reasons to scuttle your equities (stocks) in every morning paper and on every broadcast of the nightly news.”

The good news is historically stocks have gone up more than they have gone down with more time spent in bull markets than bears.  And the year after a bear market ends has historically seen large gains.

Don’t try and miss the declines by jumping out of the stock market because things look bad.  And here is why.  If you are out of the market you will very likely miss the good days.  Missing even a few of the best days each year in the past would have reduced your results dramatically.   The more of these "best days" you miss the worse your return may be and can even turn potential positive results into losses.

So by trying to miss worst days you could end up missing the best days.   We believe the only way to ensure you experience the best days are to remain invested.

Even if you could get out in time you would have to be right twice, and timing when to get back in can be even trickier. After a decline the bounce can come fast, when it's not expected, and in the past there were big gains during the initial phase of recovery.  Those bounces are precisely some of those "best days" you could miss if you jump out.  You won’t know the best days are coming until after they occur.

Jumping in and out of the stock market based on fear, predictions, or other feelings is called market timing.  Market timing is usually not a viable strategy. But because as humans we are so susceptible to our emotions, and it seems like a logical thing to do, I believe the allure of market timing to be the biggest barrier to growing your account balance.

Historically, the more reliable way to build wealth in the stock markets is to remain a long-term owner of stocks.  Think of yourself as just that, an owner.  If you own a rental, farm, or a business you probably don’t rush to sell it the first sign of trouble.  Let's say you own a pizza shop and last Friday night was a little slow, didn’t sell as many pizzas as you expected, would you immediately put a for sale sign on the door?  You should think of your investments in the same way.

What should you do during the bear?

We know bear markets are an inevitable part of the market cycles and will come.  So, we must have a plan to deal with this foreknowledge.  And we offer the following recommendations:

Plan to hold.  Accept the risk levels you are comfortable with and consider holding through it because you don’t want to engage in timing and miss the best days.

Stay Diversified. Have an investment plan that includes diversification.  While some investments like cash and bonds may look useless during good times, they can be invaluable in declines, acting as a buffer or getting the see-saw effect (when stocks go down bonds generally go up).  So, don’t stray from your plan during the good times or in bad times.

Look for a rebound.  During these storms, as a part of your plan, we can look to rebalance by adding into stocks when they are lower after a decline. If possible, increasing contributions or putting additional cash in the market historically has paid off well.  The year after a bear market ends has historically seen large gains.

“Some years, the gains in underlying earning power we achieve will be minor; very occasionally, thecash register will ring loud. …. Every decade or so, dark clouds will fill the economic skies, and they will briefly rain gold. When downpours of that sort occur, it’s imperative that we rush outdoors carrying washtubs, not teaspoons. …  This economic creation will deliver increasing wealth to our progeny far into the future. Yes, the build-up of wealth will be interrupted for short periods from time to time. It will not, however, be stopped.”

Based on the historical facts we have available to us, generally being a long-term owner can be a more prudent, reasoned, and calculated approach to managing your investments. We are programmed to think, "don’t just sit there, do something!"  But in a bear market its "don’t just do something, sit there". (Jack Bogle)

There will be good times and bad, but the gains may come from a gradual, maybe boring, accumulation of dividends and appreciation over longer periods of time.   Much of your gains could be in compressed time frames ("best days") so be prepared to not see growth for periods of time.  Returns tend to be lumpy but you must be in the market to realize those best days.

However, things do change, and you should reach out to us if anything in your financial situation has changed and would cause us to consider making changes.

Back to the trivia question.  The two biggest market slides since 2008 were around 2011 and 2015.  The events surrounding the decline in 2011 were the so-called PIGS of Europe (Portugal, Italy, Greece, Spain) with the Greek debt crisis.  In 2015 there was a crash in oil prices and worries about China (sound familiar?).  How easily we can forget as time passes.  Just like we forgot the last couple declines in 2011 and 2015, years from now we may also forget about 2018.

Remember its always darkest before dawn so even when things look their worst a turn may be coming soon.

Worried about the big one?  See my next installment where I will parse out "mega meltdowns" and secular bear markets.

Don't delay. Schedule your consultation to discuss your financial goals and how you are positioned to reach them.

The views and opinions expressed herein are those of the author(s) noted and may or may not represent the views of the Lincoln Investment Companies.  The material presented is provided for informational purposes only. Nothing contained herein should be construed as a recommendation to buy or sell any securities. As with all investments, past performance is no guarantee of future results. No person or system can predict the market. All investments are subject to risk, including the risk of principal loss.  Diversification does not guarantee a profit or protect against a loss.  The Federal Reserve System (also known as the Federal Reserve, the Fed) is the central banking system of the United States and controls the Federal Funds Rate, an important benchmark in financial markets used to influence the supply of money in the U.S. economy.